Destination : Heritage of Murshidabad and Mayapur

Mayapur - Just 130 kilometers north of Kolkata, the historic city of Mayapur is home to numerous sites of religious and cultural importance. Located on the banks of the Ganges River. Calling itself “The Spiritual Capital of the World,” Mayapur is home to the global headquarters of ISKCON (International Society for Krishna Consciousness)—colloquially known as the Hare Krishna movement. The beautifully maintained ISKCON property at Mayapur includes a range of temples, educational institutions, and common spaces for collective prayer and meditation. Mayapur is a must-visit destination for those touring the state of West Bengal.

Murshidabad - is a town and district in West Bengal. It was once the capital of Bangla, Bihar and Odisha. The last capital city of independent Bengal was named after Nawab Murshid Quli Khan, the Dewan of Bengal, Bihar and Odisha. It is situated on the banks of the Bhagirathi. A city of splendors and famous for its silk, it was made capital of Bengal in 1717. The British shifted the capital to Kolkata in 1773. Murshidabad is well connected with Kolkata by Rail & Road way, It’s just 200km away from Kolkata.

Sightseeing as per itinerary

Food other then what mentioned on inclusions

Any other items not mentioned in „Cost Includes?

Morning pick-up from Kolkata & start your Mayapur & Murshidabad Trip. Mayapur has the famous Radha Krishna temple (Chandrodaya Temple) which tells the story of the beautiful artistry of the talented artisans. A Trip to ISKCON Mayapur gives you the feel of mental calmness and at the same time power of God Almighty can be sensed. This temple has an exhibition section which displays the different works and events of the life of Sree Chaitanya. Then visit Yoga Peeth “The birth-place of Sri Chaitanya Mahaprabhu”, Chaitanya Math, Devananda Gaudiya Math, The Chand Kazi’s Samadhi (Chand Kazi was influenced by Gauranga and became his follower). Then visit the Sonar Gouranga Temple which has a splendid golden statue of Sri Chaitanya. The Essence of the Trip: You will get the delicious Bhog in the ISKCON temple. In afternoon continue our further journey to Murshidabad (100 km from Mayapur). Late evening check-in at hotel. Overnight stay at Murshidabad.

After breakfast start our day trip to Murshidabad. First, we will visit the house and cemetery of Mir Jafar. Nimak Haram Deori is the main gate leading to Mir Jafar, the traitor’s palace Jafargunj. It is a memorial of the darkest hour in the history of Bengal. Next, we will visit Hazarduari, the magnificent Palace with a thousand doors. While 900 doors are real, the rest are false doors built to confuse intruders. The construction style of the palace is an amalgam of Italian and Greek architectural styles and is a great example of Murshidabad’s rich cultural heritage. Then we visit Bara Imambara, the largest Imambara of India, built by Nawab Nazim Mansoon Ali Khan Feradun Jah in 1847 AD. It was built after the Imambara built by Siraj-ud-Doula was destroyed in a fire. This massive complex was built is a record time of 11 months. Also visit Jahankosa Canon. The canon weighs 7 ton and means ‘Destroyer of the World. Further visit Katra Masjid, Wasif Manzil, Nasipur Palace, Khosh Bag, Tomb of Siraj Ud Daulha. Medina Masjid & Moti Jheel. Overnight stay at Murshidabad.

DAY 3: RETURN BACK TO KOLKATA

After breakfast check out from Hotel & start our return journey to Kolkata. On the way we visit Plassey. Plassey is a place of great historical importance. In 1757 a battle was fought between British and last nawab of Bengal, Bihar and Orissa. Siraj –ud-daula the nawab was defeated and later killed and Mir Zaffer who ditched Siraj-ud-daula and became the British agent was made Nawab. The place to see at Plassey is nothing but the memorial which was erected by Lord Curzon at the mango grove where the actual battle of Plassey took place. Then start our return journey to Kolkata. Tour end with sweet memories. 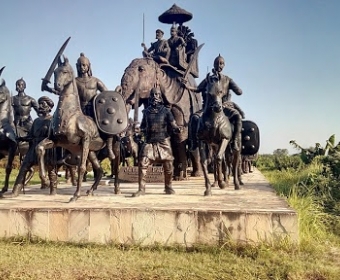 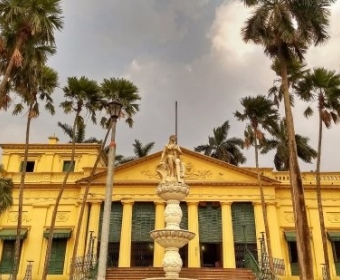 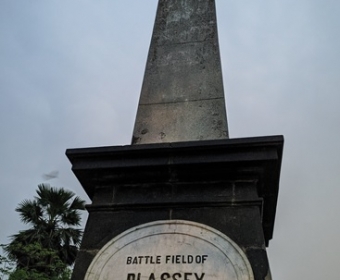 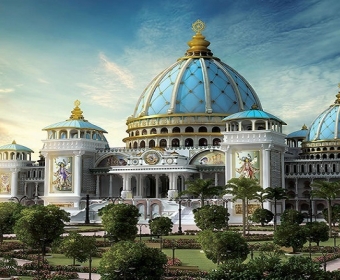 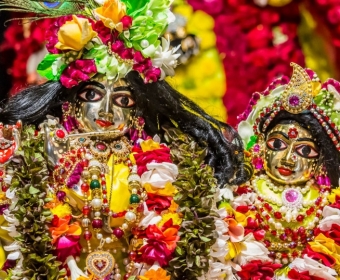 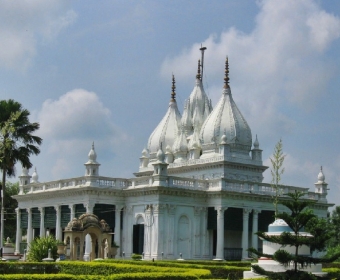 No Video is found

The ISKCON Chandrodaya temple is the global headquarters of the Krishna Consciousness movement. This temple is often referred to as the Lord’s paradise by visitors since it brings about such a healing experience for them. Green and naturally beautiful, the vast property has several places of worship dedicated to several deities that thousands of people visit each year. All the significant gods have idols established here and catch the attention of visitors with their intricate forms and designs. The founder of the temple, Acharya Srila Prabhupada, wanted this to be a place where people could come to observe silence and find their inner voice through peace. The site that attracts the highest number of followers is Srila Prabhupada’s Pushpa Samadhi Mandir, a shrine dedicated to the late spiritual leader. The marble dome glows softly under the early morning sun rays. Apart from visiting ISKCON, make sure you eat at Govinda Restaurant- a specialty of all ISKCON temples. The food is delicious and an absolute treat.

This wondrous place is the birthplace of Chaitanya Mahaprabhu. He was born under a neem tree that is at the heart of Yoga Peeth. There is also a hut that illustrates the life of Saint Chaitanya, along with his philosophies. Yoga Peeth is a yoga center that is visited by people from around the world. When people come together in peace and collective consciousness, the positivity is unlike any other; you will witness that energy here. This place is exceptional because it is sure to teach you everything one needs to know about yoga, the Vedas and meditation. The structure is 30 meters tall and made of marble that serves to create a very soothing vibe. You can also spot the shrine of Srila Bhaktivinoda Thakur located close-by.

Chand Kazi was a person of the Islamic faith. He came to be known as the magistrate of Nabadwip who strongly revolted against the Harinam Sankritana movement in Mayapur. He also broke the mridanga of Srivash Pandit, the man who led the movement of Sankritana. Later in life, he went through a transformation, which made him a devoted disciple of Shri Chaitanya Prabhu. This Samadhi commemorates his transformation and ardent dedication.

If you love shopping to lift your spirits, this is the place for you to be! With beautiful Krishna idols, books, puja tools, and many more items, the market is always buzzing with life. The fragrance from the sweet-smelling flowers up for sale wafts all over the market and gives you that special feeling that is unique to every spiritual place. You can also buy yourselves and your loved ones a few clothes from here if you’d like. Visitors find it exciting to visit this market early in the morning since it is the liveliest during these hours.

Built by the Acharya of the Gaudiya Math, Srila Bhaktisiddhanta Sarasvati Maharaja, this math is dedicated to Radha Govinda. It comprises of four altars, all built to show reverence to the Vaishnava Acharyas, namely Sri Madhavacharya, Sri Ramanujacharya, Sri Vishnuswami, and Sri Nimbarka.

Built in 1837, Hazarduari Palace is one of the most popular tourist attractions in Murshidabad. The magnificent palace, which got its name for having a thousand doors, was constructed following the European style of architecture. Apart from the thousand doors, Hazarduari Palace also features 114 rooms and 8 galleries. The three-storey palace has now been converted into a museum which showcases a wide collection of paintings, several portraits of the Nawabs of Murshidabad, armoury used by the Nawabs and various other interesting things from the past.

The Nizamat Imambara is located quite close to the royal Hazarduari Palace. In 1847 AD, Nawab Nazim Mansoor Ali Khan Feradun Jah built the Imambara after the Siraj-ud-Daulla's Imambara was destroyed by a fire. This is the largest Imambara in West Bengal.

Nawab Wasif Ali Mirza Khan built the Wasif Manzil but a huge part of the palace was destroyed in an earthquake in the year 1897. Later, the palace was repaired but the second storey was never constructed again. Located near the Hazarduari Palace, the Wasif Manzil also had an artificial hill and a garden close to the main palace, but those don't exist any more. The palace is quite small in size, but it is as beautiful as any other royal palace.

Moti Jheel is a beautiful horseshoe-shaped lake that was excavated by the famous Ghaseti Begum's husband, Nawazesh Mohammad. According to history, British high-ranking officials such as Warren Hastings, Sir John Shore, Lord Teignmouth and several others had their residence at Moti Jheel. This place was also popularly known as Company Bagh.

In 1723, Katra Mosque was built by Nawab Murshid Quli Khan and is one of the oldest mosques in West Bengal. The double-storeyed mosque is raised on a platform with a number of domes and four tall octagonal minarets, out of which two were destroyed. These minarets were used to keep weapons in the ancient days. Katra Mosque, which is now maintained by the Archaeological Survey of India, is so big that it can easily accommodate 2000 people inside the prayer hall. Visitors can also have a look at the tomb of Nawab Murshid Quli Khan located at the entrance of the Katra Mosque

The Nasirpur Palace was constructed by the descendants of Debi Singh, who was a tax collector during the era of the East India Company. The palace features a temple of Lord Lakshmi-Narayana and a Ramachandra Temple, which is said to be one of the biggest temples in the district of Murshidabad. Meanwhile, the Lakshmi-Narayana Temple is also popular for the Jhulan Yatra celebrations in March.

Situated beside the Bhagirathi river in Murshidabad, the Kathgola Palace is one of the major tourist attractions in the town. The palace along with the gardens was built to entertain the Muslim and European merchants when they came on their trade visits. It is said that black roses were found in the Kathgola Gardens in the past.

Janardan Karmakar, a craftsman from Dhaka, built a large canon which was named Jahan Kosha. The name of the canon means the destroyer of the world. The canon, which weighs 16,880 lb and is 17.5 ft in length, is located at a distance of only 1 km from Katra. Apart from the canon, tourists can also take a tour of Kadam Shari's mosque constructed next to Jahan Kosha. The mosque reportedly features the replica of prophet Hazrat Muhammad's footprint.

Jafarganj Cemetery, which is located near the Hazarduari Palace, serves as the cemetery for the famous Mir Jafar and a number of his family members such as his father, Syud Ahmed Nazafi, sister and two of his widows. Initially, the place was known as Jafarganj Complex and Mir Jafar had built his palace there.

Less than 7 Days Prior to Date of Travel: 100% of the Package Cost as cancellation charge

7 – 15 Days Prior to Date of Travel: 75% of the Package Cost as cancellation charge

16 - 30 Days Prior to Date of Travel: 50% of Package Cost as cancellation charge

25 % at the time of booking and balance 10  days prior travel date.

All bookings are on special corporate non-refundable basis.

Please Fill up to get Call Back from our Travel Consultant